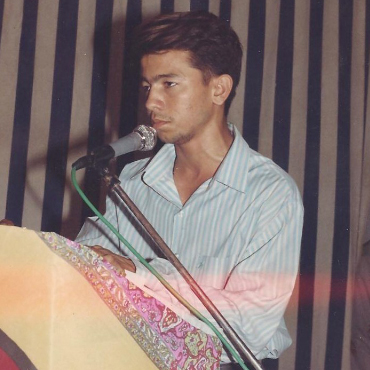 All praise is due to Allah, the most beneficent and the most merciful, and all salaam and durood on the supreme creations of Allah, His last Prophet Muhammad (P.B.U.H) and his descendants (Ahlul bayt A.S). Born in Karachi, Pakistan, Ali Safdar Rizvi is one of the most devoted and well renowned nauha reciters in the world. He was born to Syed Ali Tahir Rizvi on 16 May. He began this journey in this blessed field in his childhood and alhamdulillah since, he has earned great recognition as a reciter of manqabat, nauha and salaam.

One of the most prominent features is the way in which Ali Safdar Rizvi has revolutionized the theme of reciting nawhas. He has introduced flare and passion, as well as sending a clear message in his kalam. He believes that one of the most important reasons for reciting nawhas and manqabat is that they should promote the real teachings of Karbala and to inculcate behaviours in people such that they live their lives how the Ahlul bayt (as) lived their lives. His journey of this zikr began in Karachi, but with the dua's of Bibi Fatema Zahra (as), he gained recognition in a relatively short space of time. Within a couple of years, he was reciting all over Pakistan, followed by international recitations.

To conclude, we would like to wish Ali Safdar Rizvi the best of luck for his future endeavours. May Allah bless him with His infinite bounties, and elevate Ali Safdar's status in this world and in the hereafter. Please keep Ali Safdar in your duas. Please recite a sura fateha for the parents of Ali Safdar.